Having sold no units, I removed my 2011 Australia Wide EP from sale in March 2013. The original EP is now replaced by an Extended seven song Demo EP available on CD Baby. I created different artwork for each release.

I have a university major in Art History but no formal training in design or applied arts. Perhaps as a result, I consider myself more in terms of being a conceptual artist rather than a very technical one. The artistic process is for me mostly an intellectual exercise. I won’t pretend however I don’t sometimes spend long hours trying very hard to be technical.

In the above artwork, I’ve mixed a combination of flags and iconographies into the design. Most obvious to some will be the depiction of the Southern Cross or Eureka Flag flying in the face of the British, Union Jack. Both flags are superimposed over the intense orb of a white-hot, native, Australian sun. These are sealed by a melting plastic barcode. Yes, be convinced, it’s hot as hell and sticky in there!

Outside the barcode and across the wide sweep of the Australian island-continent (the land/sea scape) is the embryonic blue, the yellows and musty reds which for me represent the native or indigenous experience. They are the colours of the ocean and earth; the light, the night, the dust and the skies of Australia’s outback.

My video song demo THEIR WORLD attempts to capture a sense for this Australiana by relating a simple yet peculiarly Australian experience.

You might also imagine shapes of fish or emus or marsupials such as echidnas or kangaroos becoming, living, moving and receding with the light. Here, I’m attempting to capture the sense of a living, dying, breathing, cyclic, shape of Australia. I’m asserting the notion that our Australian experience can’t be reduced to a flag or inhabit the realm of a plastic barcode. Paradoxically, I’m also clearly alluding to the Aboriginal flag. Indeed, discovering for myself why it is actually a very well conceived flag!

If, you look closely above the centre of the barcode, I’ve tried to achieve a sense of bold nature; perhaps an outback sky cracking open. Is it a looming thunderstorm that will bring the wet or simply the peculiar light and colours of an outback sunset? A distant and also dissident horizon develops out of, or rather, in spite of, the barcode. This may be variously interpreted or simply seen for what it is. Personally, I like the idea of it being, dreaming. Dreaming for escape. Dreaming into the mysterious distance; imagining what may lye beyond the horizon. For some it may be heavenly wonders or nature’s awesome sights. For others it will be city lights or a new port to explore.

Similarly, various interpretations may be applied to the two flags and barcode. For instance, there is quite a few Australians but particularly indigenous Australians doing jail time for breaking our British property laws. You might consider the stripes of the barcode in that context. I, imagine if I were incarcerated, my mind may well wander out along that horizon. Long, for the integrity of nature or imagine a land, a personal future, filled with better adventures.

While a legacy of Empire is perhaps one of the world’s most successful democratic parliamentary and judiciary systems … or at least the opportunity to establish such, Australia also has an important history of rebellion and dissent. Colonial Australia is not only a history of Empire but also a history of standing up for the rights of the worker or the little fella in the face of hegemony by the far right. The far right in Australia’s unique history meant the forces of plunder and exploitation vis-à-vis frontier development, namely the British establishment.

Today, the traditional political delineations are blurred. There are new guises and terms for not so new agendas. Establishment stakeholders have also changed or not. For instance the meaning of Neoliberalism originally coined in the late 1930′s seems to have changed dramatically over recent decades and years. Today, one might even be forgiven for confusing it with a flagrant monopoly capitalism that parallels neo-conservative mercantilism; money grubbing, power mongering, corporate imperialism. No, not exactly the invisible hand from which it is arguably derived. Smith, warned of the evils that might transpire in a business dominated political system and today’s spiritually unintelligent Neoliberalism has borne that out; it lacks the wisdom and sense of social stewardship Smith’s free trade liberalism originally intended.

“The workers have nothing to sell but their labour power”

Whatever the political spin may be, there will no doubt always be reason to reference, for the greater common good, our indomitable, Eureka Flag. May the same universe whose stars it depicts help to protect it from being misused by propaganda merchants.

It’s worth mentioning the background is a night shot of the waters and lights of the port of Geraldton, Western Australia. Thousands of tons of wheat are or at the least were at the time of my originally writing this post on my private artist blog, exported from here every year as are or were enormous quantities of iron ore bound directly for China. Australia is the world’s biggest iron-ore exporter. In the words or rather tweet of ABC broadcaster Phillip Adams,

I’m in iron awe of Gina

His tweet was referring to Australia’s richest person and very own Iron Lady, mining magnate, Gina Rinehart who is or was the biggest supplier to China’s insatiable demand for the metal. Suffice it to say, we live in a world economy. I could try to discuss why that barcode is slapped across the centre of Australia or enter into a discourse about the code itself, 0-0001800000-9. I leave that however to you the reader, if interested, to investigate and discern for yourself.

I removed this original release from sale because it didn’t sell even one single unit. Besides the obvious fact no strong promotion or marketing was put behind the EP, perhaps the artwork may have had something to do with the lack of interest. I’ll confess, I’m not a big fan of the look of this EP cover. While it does hold symbolic and aesthetic value for me owing to the reasons I’ve cited, I don’t think it looks particularly compelling from a marketing perspective.

I therefore changed the cover art for the 2013 release of the Extended EP. It’s now a photoshop image of me with hat, blue sky and windmill taken from my Get West music video.

Not long after its release, I did mail a CD of my 2011 Australia Wide EP replete with the above mentioned cover art to the ABC’s Double J digital TV station or show but my submission wasn’t acknowledged and I never heard any of my songs. I stopped listening so I don’t know if it still broadcasts or not.

This and other instances such as the one I refer to in this 4th Episode of my radio show or the one, not when I sent my EP to Double J TV as cited above but sent an original song to Triple J Radio (see below tweet) finally has me convinced. My lack of success in the Neoliberal Australian music industry has a lot less to do with my cover art or poor efforts at self-promotion or lack of talent as a songwriter or even my rather ordinary musicianship and a lot more to do with the bias of #NeoHegeMonopolistic market makers.

Unfortunately Twitter has since suspended the account that tweeted a great video excerpt from a “Seinfeld” episode,  I had embedded here replete with my comment on it … my comment is now all you can see. So, then, the embed no longer helps to illustrate my point as well as it once did. I wish I could remember the back-and-forth between George and Jerry in the back of that taxi so I could cite the script thereby lending the context.

… replete with Canned Laughter to facilitate, "urban(e) acquiescence" and partly what I was alluding to in my song "Clever Faustian Fools" those sell outs @triplej probably binned when I sent it to them in 1999 #ZMOG #ZioMarxism #Opioids #WhiteGenocide #TheSophisticatedParasite https://t.co/YFgQ0FUqui

Yes, in my view, only those who comply to their PC paradigm are entitled to succor on the tit of what they deign to dribble down … from what, of course, they’ve stolen. 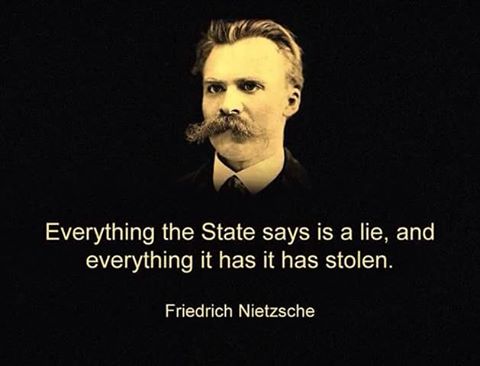